Back to School Blogs for Parents & Teachers

Author Bio: Dr. Claudia Alexander flies spacecraft by day at NASA’s Jet Propulsion Laboratory. She got to crash the Galileo spacecraft into the planet Jupiter (on purpose), as the last project manager of that historic mission. She studies comets and icy moons, and currently serves as the NASA Project Scientist for the Rosetta mission (a European Space Agency mission). By night she re-imagines the universe with fiction writing. The first of her STEM education, science-learning book series for kids ages 8-10, titled Windows to Adventure, will launch in November 2013. Aside from children’s chapter learning books, she has written a number of steampunk (retro-futuristic) short stories, and a full length elf-punk novel. Follow her on twitter at @claudiauthorsci, @Windows2Adventr & @redphoenixbooks. See emerging artwork for the book series, see this Pinterest URL: http://pinterest.com/RedPhoenixBooks/book-2-windows-to-adventure-venus-artwork/ 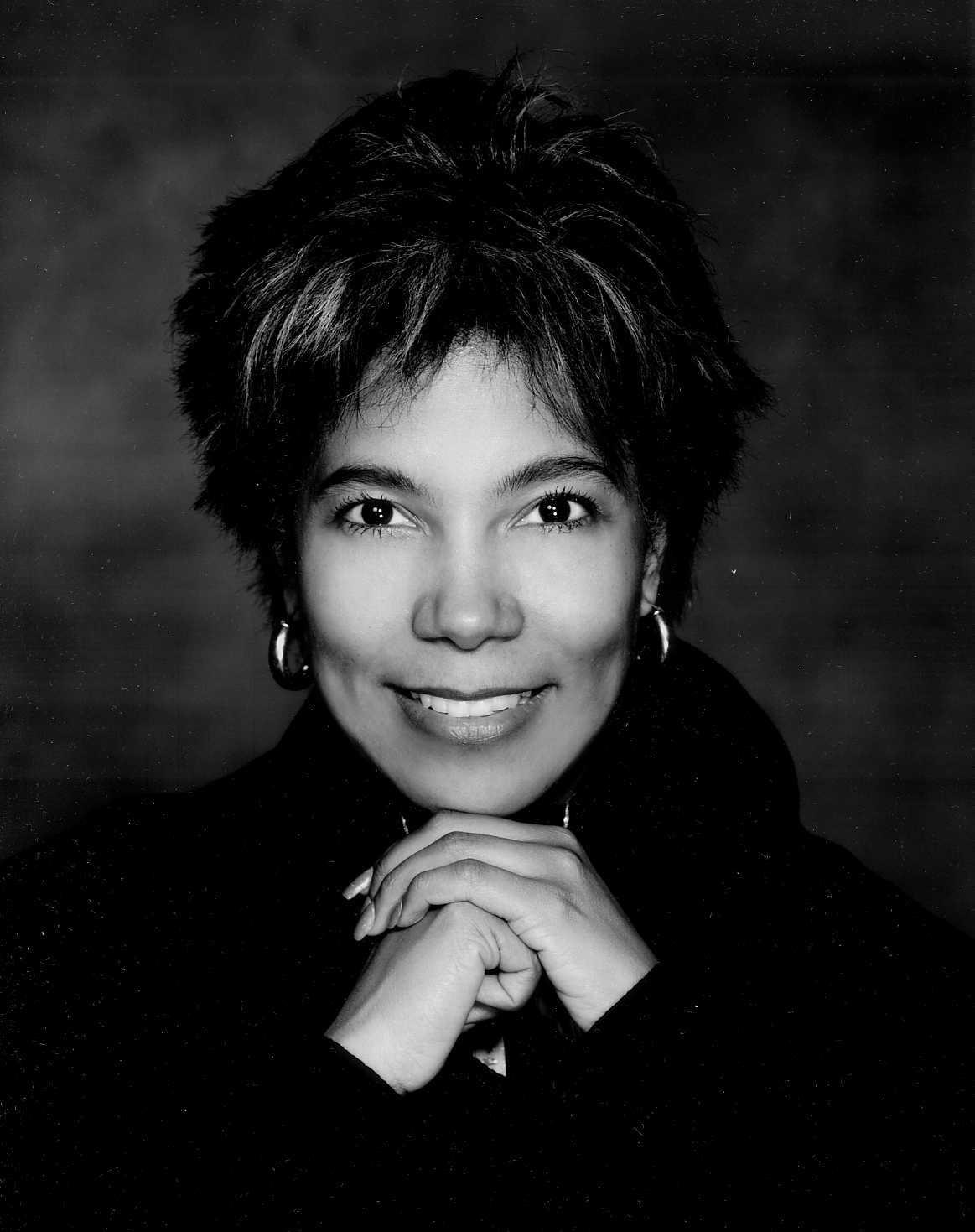 Today I’m going to talk about the planet Venus, often called a sister-planet to Earth. It is virtually the same size, with approximately the same length year, with a surface crust that is approximately the same age! Just one planet closer to the Sun, one would think that therefore it would have a similar temperature and environment as Earth  – the sort of neighboring planet that you could visit like you visit your neighbor’s house. 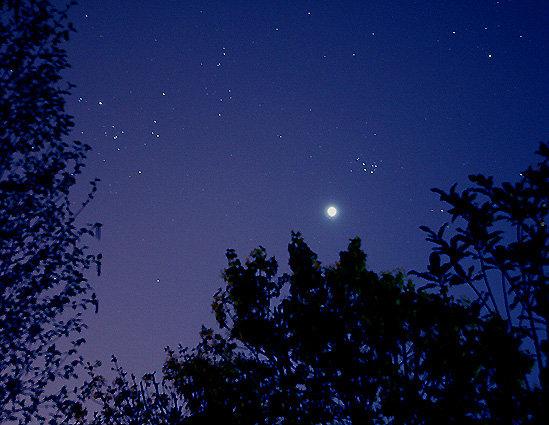 Venus, visible in the red glow of sunset near the Pleadies, in the constellation Taurus [2007]. Credit: Michel Hersen.

Nothing could be further from the truth! Venus is a radically different planet than Earth, starting with the fact that there is no water whatsoever, and its surface is fiercely hot (700 degrees F!).

How can a planet so similar in size and crustal features to Earth, presumably made of the same stuff, be so radically different?

The truth is that with Magellan, Venus Express, and other missions, we are only starting to learn about our sister planet, and the geophysical forces that may have shaped both Earth and Venus. 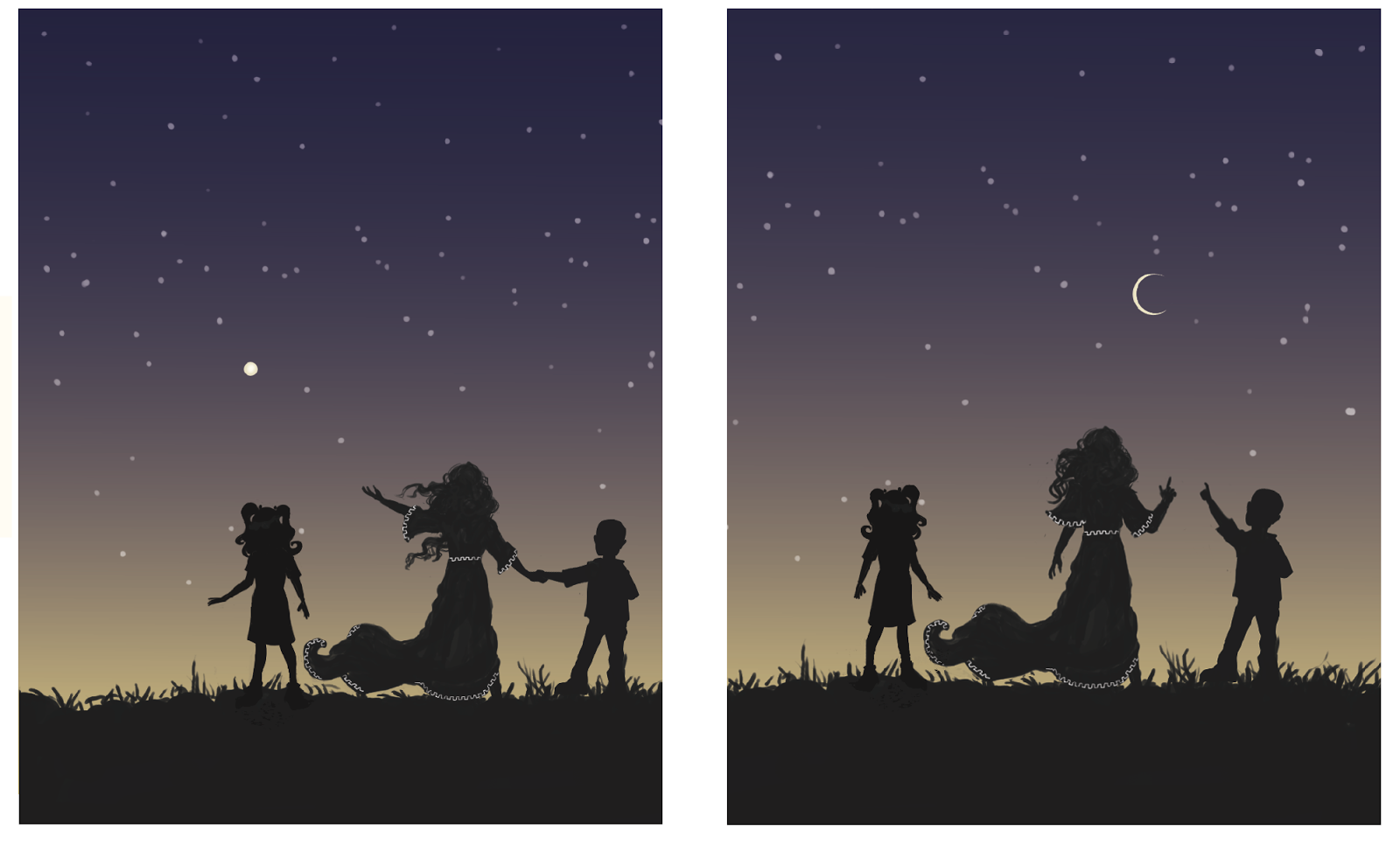 Venus, the character, standing outside Rashad’s house on Earth, shows how Venus, the planet, is visible for a few minutes just after sunset.

To try to introduce geophysical concepts about Venus (and by extension Earth) to a reading audience of approximately 3rd and 4th grade(s), I included the topic in my Windows to Adventure STEM-education, science-learning book series.

Angie and Rashad have discovered a magical creature than can transport them to different planets, on exploratory adventures.

It’s important for kids (and adults) to know that Venus is visible by the naked eye almost everyday, just before dawn and/or just after sunset. That’s why it’s known as the ‘Morning star’ or ‘Evening star.’ As shown here, we try to make that point with both artwork and photography. Nothing gives me more pleasure than, for example, the illustrators who work on this project call me up excitedly to tell me that they’ve just seen Venus for the first time in their lives (or realized finally what they were looking at).

To reinforce the notion of just how hot the surface is the visit requires a space-suit-like ‘bubble’ suit that prevents them from burning up, and provides the oxygen they need to breathe in the largely carbon-dioxide atmosphere of Venus.

Angie and Rashad get to experience the atmosphere of Venus with a ride in a fantastic ‘cloud cabana,’ positioned just below the very dense cloud deck of Venus – positioned much higher up than a plane would fly on Earth. The cloud cabana takes them on a grand tour of the continents of Venus. (Imagine being taken on a grand tour of planet Earth in the space of about 15 minutes! What features would You show a visitor about planet Earth in such a short space of time? Grins). 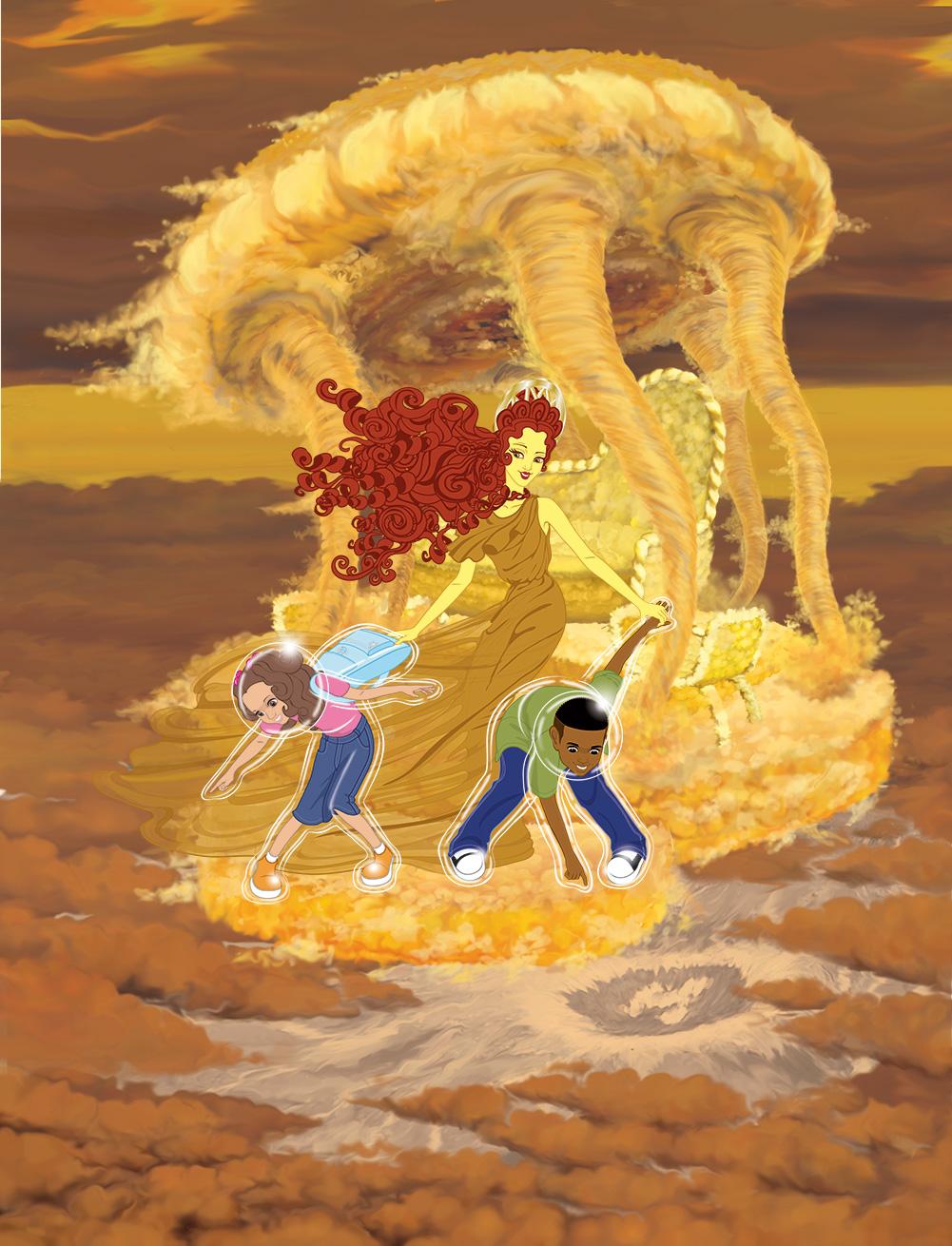 Venus doesn’t have official ‘continents’ as we think of them on Earth because continental crust is actually quite different than ocean crust, and stands above Earth’s ocean waters. Instead, scientists have labeled the land masses that stand above Venus’ mean equatorial radius ‘Highlands,’ and those deep, nether regions that are analogs of Earth’s ocean basins & trenches as ‘Lowlands.’

Topographic map of the surface of Venus, showing its three major Highland regions. Those are: Ishtar Terra (yellow region at the middle top); Aphrodite Terra (long, narrow, yellow & green region along the equator to the right); and Lada Terra (green region along the south polar region). Other ‘island-like’ highland ‘Regios’ are seen in yellow on the left, middle, and elsewhere. Lowlands are indicated in blue.

It’s a fascinating exercise to consider what Venus might look like as an ocean-covered planet (like Earth), in which Ishtar Terra and Aphrodite Terra stand above the water as real continents! For fun, our illustrator took the liberty in a work-in-progress painting like this (we’ll be working on this in the days to come, to make it sharper):

Venus’ surface features, including the island-like Regios, include many mountains and volcanoes. In fact, the surface of Venus seems to be covered with volcanic outflows. The island-like Regios seem to have been formed in a similar process to that of the Hawaiian islands – in which a crustal hot spot, buried deep in the planet’s mantle, pours out volcanic lava and builds a cone, or in the case of Venus, a sizeable, island-like mass (of sizes similar to the state of Arizona). 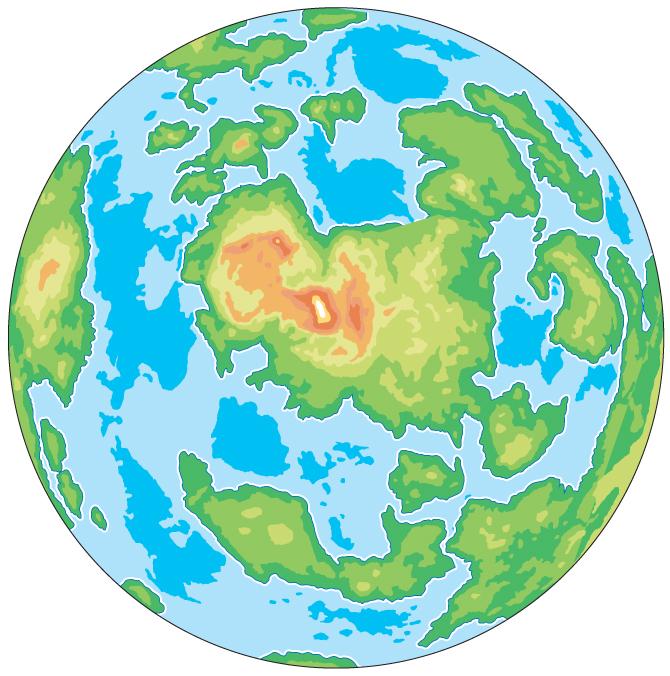 Let’s take a quick look at Venus’ tallest mountain, named ‘Maxwell Montes’ after scientist James Clerk Maxwell. This mountain, named Maxwell, seems to have been formed by a folding/compressing process. 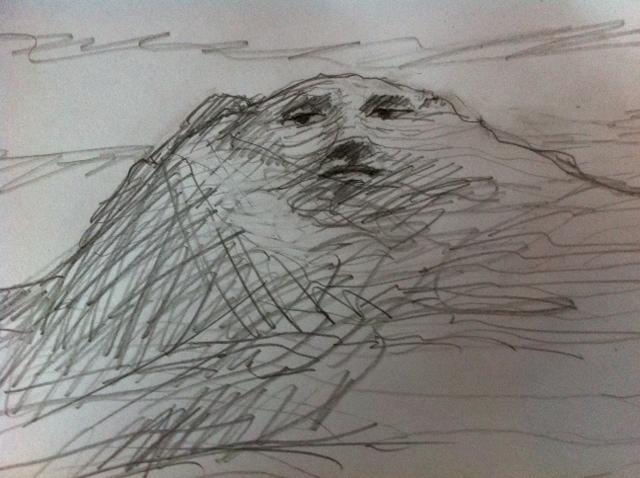 Sketch of Maxwell Montes realized as a human-like character with a face.

Mountains like Maxwell Montes seem to have been created by a stretching and compressing process on Venus that greatly resembles the same process on Earth that created the East African Rift.

So we have a great many questions left about planet Venus – what is its chemistry? What is the geophysics of how the forces that move the surface work? How did it come to have so much carbon dioxide in its atmosphere since it is a sister-planet to Earth and formed largely in a similar spot in the primordial solar nebula? (The answer to that question may have more to do with what makes Earth unique than phenomena of Venus). 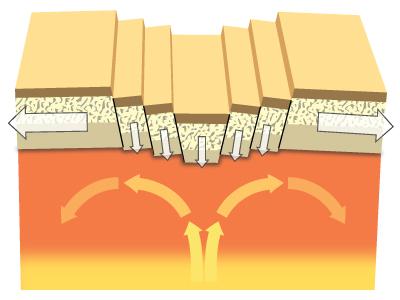 A schematic of a feature called a ‘rift valley’ created by the motions of hot mantle beneath the crust that force the surface to fracture and fall in (creating a giant valley) – similar to the process that has (is) creating the East Africa Rift; that created the Dead Sea; and other features on Earth.)

There are quite a few fascinating legends about planet Venus. And Venus played a key role in the way in which early scientist understood the size of the solar system, and the fact that objects in the solar system revolved around the Sun, and not around Earth.

Venus is a fascinating place, and I hope to dive into more details in another blog on this website, and with additional books on the topic with Windows to Adventure. Hope you enjoyed this brief introduction. 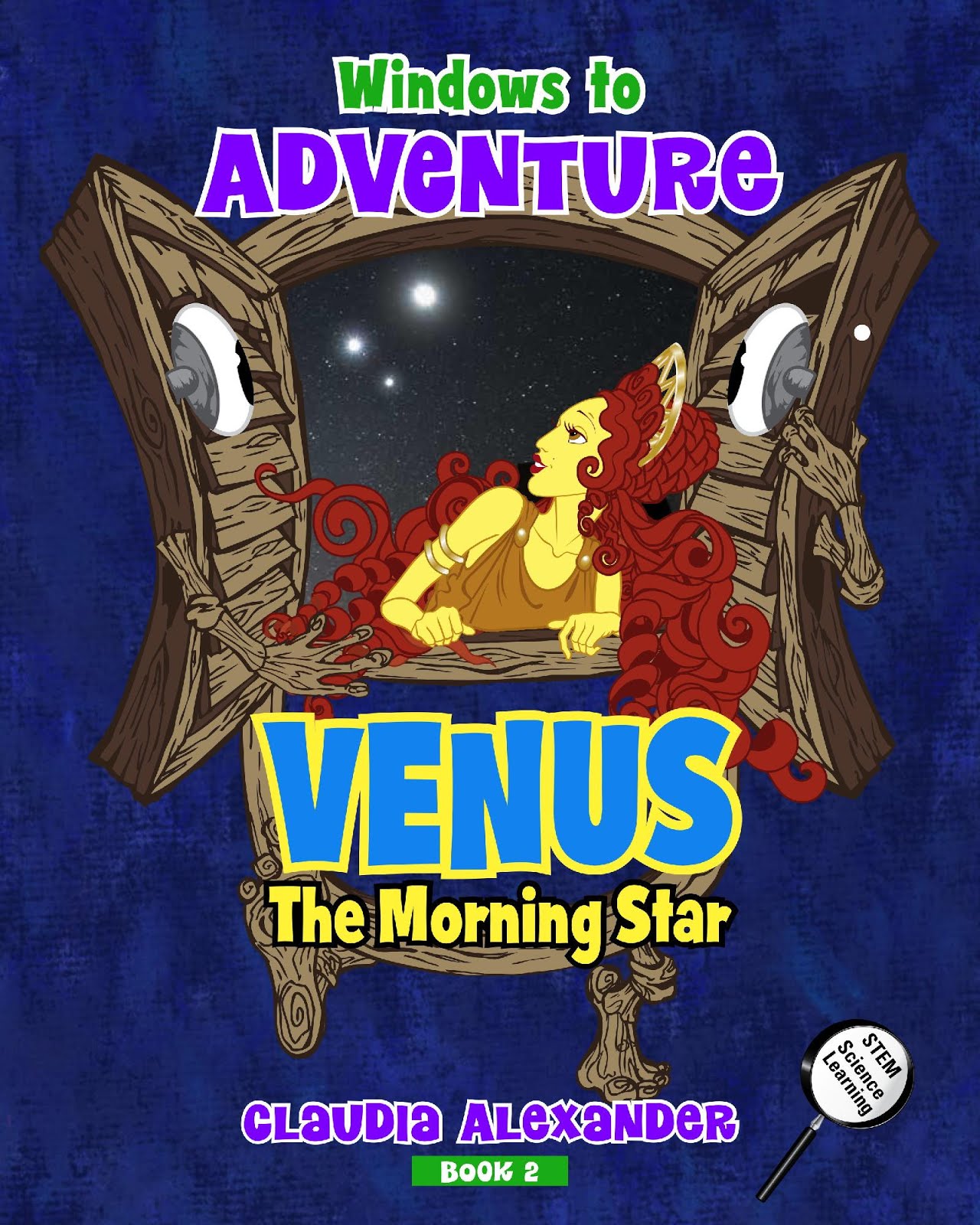 Windows to Adventure: Venus, the Morning Star will be released soon from Red Phoenix Books.