Read about the many great lessons to celebrate Pi Day. Check out this article from the Boston Globe on March 22, 2012. Click the following link to see the original:  http://www.boston.com/yourtown/cambridge/articles/2012/03/22/pi_day_celebrated_at_hanover_high_school/

Hanover High rocks out with the infinite number 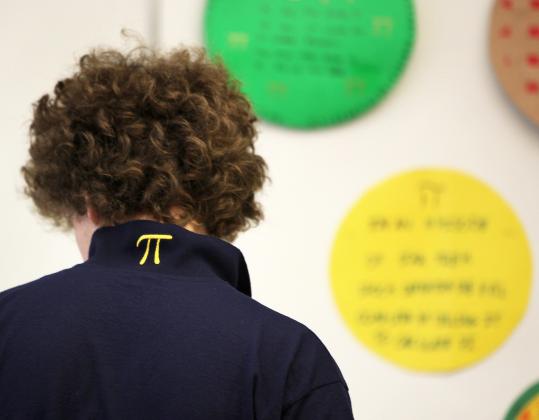 HANOVER – “Three point one four one five nine / Calculating, yo, is how I spend my time.’’
If the students of Hanover High School are rocking out to songs they wrote themselves and wearing T-shirts decorated with a mathematical symbol, it must be Pi Day, an annual celebration of the enigmatic number whose decimal places last into infinity.
Many schools and math aficionados celebrate the number – 3.14 for short – on March 14, the calendar date that matches pi, but Hanover High did it big.
That’s because former Hanover math teacher Matthew Plummer created an online set of puzzles called the Pi Day Challenge that draws interest from around the world. His energy drummed up enthusiasm for Pi Day at Hanover High that other teachers, including Scott Hutchison and Michael Patch, have carried forward since his departure in 2010.
Students like the puzzles and the chance to earn bonus points with fun, pi-themed projects. One group, from the school jazz band, performed for a geometry class a song they wrote to the tune of “Jailhouse Rock’’:
Three point one four one five nine/ Calculating, yo, is how I spend my time/ Myles grabbed the bass and he started to walk/ Room 201did the Pi Day Rock. Let’s rock, everybody, let’s rock!/ Mr. Hutchstopped the math class talk/ ‘cuz we’re jamming to the Pi Day Rock!
Band members wrote the lyrics in the back of a school bus on the way to New Hampshire for a competition. For them, Pi Day was a way to use something they love – music – to liven up an academic subject.
“I think anything, when you infuse it with music, inflates my interest in it,’’ said Jacob Prescott, a sophomore who plays alto saxophone.
Pi Day was founded in 1988 at San Francisco’s Exploratorium, which bills itself as “the museum of science, art, and human perception.’’ The first Pi Day fell on a Monday when the museum was closed, so it started as a staff-only celebration, said Ron Hipschman, a staff scientist involved from the beginning.
The museum credits the idea to its “Prince of Pi,’’ Larry Shaw, 72, a physicist who retired from the museum in 2005 but still participates with gusto in its annual Pi Day celebration. The party for the infinite, never-repeating number – the ratio of a circle’s circumference to its diameter – has grown, well, almost infinitely, with celebrations around the world.

This year, as usual, Shaw led the museum’s Pi Procession. Each pi enthusiast carried a digit of pi, written on a pie plate, to the pi shrine, an area of the museum with a round marker set into the floor bearing the sign for pi. They circled the shrine 3.14 times while singing happy birthday to Albert Einstein, the giant of 20th-century physics who, as it happens, was born on March 14, 1879.

“Kids learn better when they’re having fun,’’ Shaw said in a telephone interview. Visitors ate pie and enjoyed the strange wonder of a number that has fascinated mathematicians for centuries.

“Here is this thing,’’ said Shaw, “that’s very physical, the circumference and diameter of a circle, and yet you can’t write an equation that describes it.’’

Hanover High School students described it as best they could, taking turns at the front of a classroom reciting digits of pi from memory, while other students videotaped the action.
“I like how it’s a day for math people . . . a day just dedicated to math,’’ said Madison Plummer, a junior and the daughter of Matthew Plummer, originator of the Pi Day Challenge puzzles. His son, Zack Plummer, a Hanover High senior, played trombone on “Pi Day Rock.’’
Two freshmen, Dominique Notarangelo and Eric Smith, performed a rap song. Wearing sunglasses and T-shirts, one decorated with a “p,’’ the other with an “i,’’ they rapped:
Got my calculator solving for diameter/ Multiply pi, you get the perimeter. Smith said he did it for the bonus points, but it was still fun. Students could earn enough bonus points to raise their average for the term 1 or 2 percentage points, their teacher said.
Later, Hutchison helped a class work on a puzzle from the Pi Day Challenge at www.pidaychallenge.com, the website where Plummer posts a new set of puzzles each year as the clock turns to Pi Day.
Plummer started the site around 2002, and before long, classes were trying it in other local schools, including Duxbury, Hingham, Marshfield, Rockland, Weymouth, and Whitman-Hanson high schools, he said.
To date, nearly 100,000 people have created accounts on the site, he said. It draws international interest, with some of the largest followings in Canada, Japan, and France.
Two years ago, more than 15,000 people in Japan took the challenge, said Plummer, who has become a developer of educational software since leaving Hanover High.
Hutchison, who wore a pi symbol on his T-shirt and a big smile on his face, was pleased to see students get into the spirit of the day.
“Math is kind of this amazing adventure, if you’re willing to investigate,’’ he said, and special events like Pi Day create a “wonderful atmosphere’’ in the building, which, “much as we try, we can’t do every day.’’
Pi Day rapper Notarangelo agreed.
“I love Pi Day,’’ she said. “It’s so much fun here.’’

Jennette Barnes can be reached at jennettebarnes@yahoo.com.