Guest Blog by John Padula. John has been teaching Middle School Social Studies for seven years – all in the Boston Public Schools.  In 2012, he was honored to be a Fund For Teachers Fellow and traveled to South Africa in the summer to learn more about education and Apartheid.
Prior to teaching, he spent over 20 years in a variety of positions in the software engineering industry.  Despite his high-tech background, he was blown away by a PD course called Teaching History With Technology (from EdTechTeacher) and has been working since then to infuse more technology in his classes.

Imagine a force so powerful that it can compel 60 educators from around Massachusetts to willingly give up a sunny day in July and converge on downtown Boston for an all-day professional development session….

I reported in an earlier post on the overall theory and structure of an EdCamp:

“An EdCamp is a relatively new style of professional development where the presenters are often ordinary classroom teachers.  There isn’t one presenter explaining one topic, there are several sessions going on in different conference rooms at the same time, each session on a topic chosen by the presenter.  Thus, no agenda, or conference schedule, is defined ahead of time.   In fact, an EdCamp is often referred to as an “unconference”..!

An EdCamp venue provides meeting spaces with lots of break out rooms, and a blank wall where participants post what topics they want to present (or discuss) at a given time and in a given break out room.  You, the eager educator, look at this on-the-fly agenda on the morning of the EdCamp, decide what you want to learn, then go to that break out room and become part of the discussion – if you wish.”

I attended my first EdCamp – EdCamp Boston – in May and became a believer before the first hour had passed.  The energy level in the room was charged and every session I attended was a winner.  The July EdCamp (EdCampBLC – for Building Learning Communities), was held at the Park Plaza Hotel in downtown Boston.  Given my experiences in May, I had high expectations for EdCampBLC – and I’m pleased to say I was *not* disappointed!

EdCampBLC was organized by a small, but energetic group of educators: Tracy Sockalosky, Sean Sweeney, Jeremy Angoff and Brian Hammel.  Once the introductions were completed, available times and room names were arranged in a grid on one of the walls.  As attendees decided on a discussion/presentation, they just grabbed a piece of paper, wrote a brief blurb about their topic and taped it to the wall, thus claiming one of the rooms for their own!

When all slots on the board were filled, the organizers of EdCampBLC transcribed the entire agenda into a GoogleDoc that we could access throughout the day from our devices.  The final agenda looked like this: 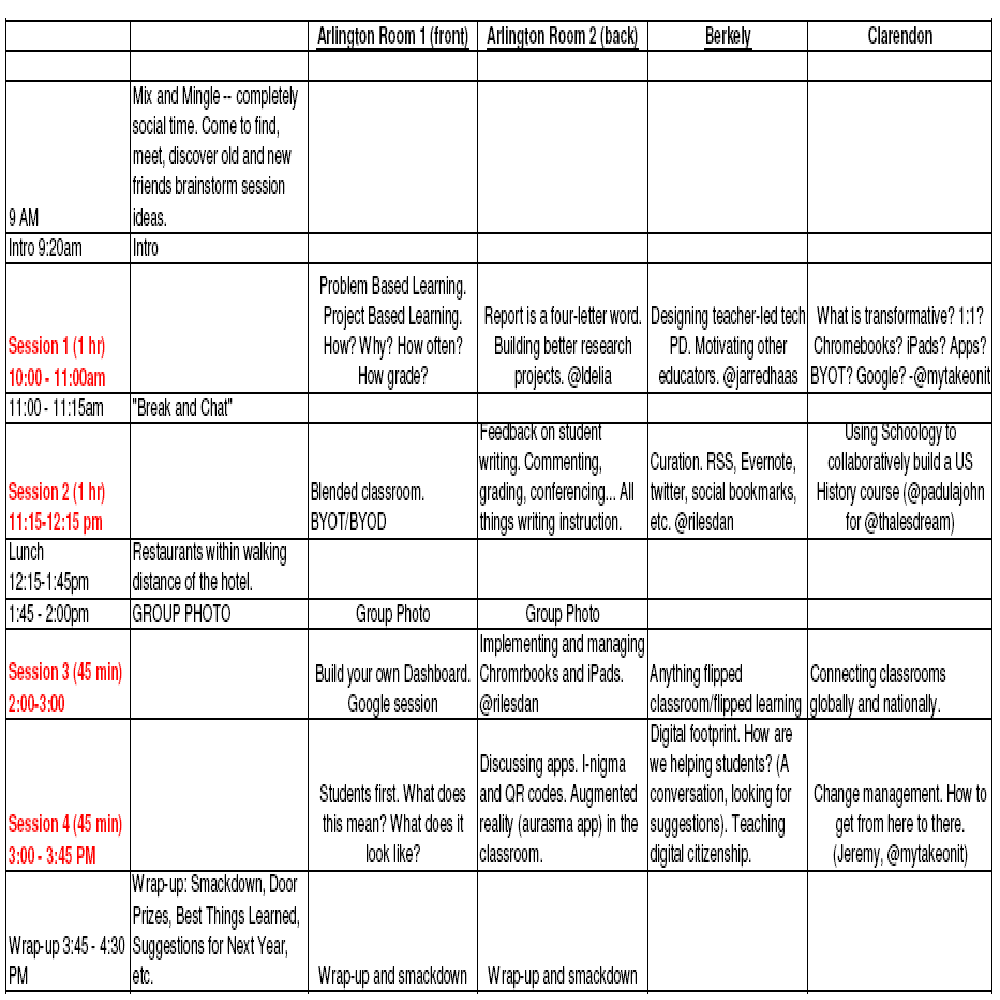 Agenda file can be found here:

Because meeting room space was at a premium at the Park Plaza, this EdCamp featured four meeting areas, and two of these were at opposite ends of one large ballroom.  If you look closely, you’ll notice I took the plunge and signed up for a presentation.  That’s me, @PadulaJohn – my Twitter handle, in the Clarendon room for Session 2 – but more on that later…!

After reviewing all the sessions, I had time for two (not counting the one I planned):

For me, the first session, “What is transformative?” was so indicative of a classic EdCamp session.  About a dozen people gathered in a room and the conversation was initially led by Jeremy Angoff.  We began by trying to define exactly what ‘transformative’ meant and what was being transformed.  As we talked, Jeremy created a GoogleDoc, http://ounce.it/ECBLCS1, projected it on the wall, and posted the link, so participants could share their thoughts in real time as we moved forward.

As the meeting rolled along, I was struck by several things.  First, once Jeremy delivered his opening words, others quickly chimed in with their own thoughts, questions and caveats.  If you walked into the room 10 minutes after we started, I think you would have been hard pressed to pick out who was ‘in charge’ of the entire meeting, as no one person really dominated the conversation.  I had my own ideas on what our conversation about ‘transformative’ was going to center around (technology in the hands of students), but many had extensions on this and a variety of other things to consider:

Those are just some of the ideas that stuck with me long after we left.

It was a thought-provoking hour that raised many important points.  As we were wrapping up, I really liked the way Jeremy paused and gave anyone who hadn’t been heard the chance to say something.  Many of those who were in more of an observing role did make some points and were able to have their opinions added to the dialogue.

The time *flew* by (when have you ever said that in a PD session??) and before you knew it, it was time to move to the next session.

[By the way: if you were waiting to hear our lofty answer to “What is transformative?” – sorry, we never got there!  As tempting as it might be to try and wrap this up in a tidy sound bite, it is an incredibly vast and complicated issue.  I was just happy to be part of the conversation!]

Session 2 was entitled “Using Schoology to collaboratively build a US History course” – and it was moderated by me!  Actually, the entire idea of utilizing crowd sourcing to gather resources for a US History course was the brainchild of Nate Everett (@thalesdream).  Nate presented this at an EdCamp session in May, but could not be at this EdCamp.  Since the theme of our EdCamp was ‘building learning communities’, I felt this was a perfect topic, so I volunteered to give the same type of overview.  There was a break between session 1 and session 2, so I eagerly awaited the flood of participants.  I had my laptop, some handouts, a few notes and a big sign indicating what the session topic was.  Time creeped toward 11:15 and I was scanning the door, watching folks walk by, pause…and then walk on!  By 11:20, there I was – staring at my projector – still waiting…!   Suddenly, the idea for a new session came into my mind “What if you scheduled an EdCamp session and nobody came?”….As I was about to pack up my stuff, I heard a voice – not exactly ‘calling out from the wilderness’, but close.  One lone participant stuck her head in and said “Is this the session on Schoology?” and I answered “It is now!”  We had reached the necessary quorum – two!

Sara Krakauer (@globetwisting) introduced herself and I quickly went through my (Nate’s) overview.  Basically, Nate created a course using Schoology and grants interested teachers admin access to the course.  The idea is to get dedicated teachers to donate their resources (lesson plans, primary sources, assessments, etc.) to this site.  Teachers would then have access to a wide array of material and could pick and choose what they needed for their particular circumstances.  Sara was kind enough to listen to the idea and had a few questions.  Since nobody else had any questions, it looked this was going to be the fastest EdCamp session on record.  However, Sara was nice enough to explain a little about herself and discuss what she was doing.  I was blown away with her initiatives of global citizenship and the model she created to get her students more involved in 21st century learning.  If you want to learn more, please see her massive blog, Innovation On Earth.

Sara explained that she was getting ready to present her learning model to Fulbright Scholars at the State Department!  She walked me through some ideas for her presentation and we talked over different ways she could use her time with these outstanding educators.  In the end – in typical EdCamp fashion – I learned more from her than she did from my Schoology overview.  It was a pleasure meeting her and getting to know more about what she is doing in her classroom.

After lunch, I had time for one more session and I chose “Implementing and Managing ChromeBooks and iPads”.  Currently, my school only has MacBooks – but I would imagine these two devices will probably be the most commonly deployed over the next five years.  As someone working toward their license in Instructional Technology, I could see myself becoming involved in managing these tech tools and I wanted to hear what others had to say about this.  The conversation was, again, very interesting, with 10-12 participants raising questions and discussing issues over managing these devices.  We also discussed the differences (and there are many) between managing ChromeBooks versus iPads.  From the notes I took, it sounded like Casper by JAMF Software was the hands-down winner for strong iPad management software.

In the end, though, the big story that everyone will remember from this session came from Jarred Haas (@JarredHaas), a middle school teacher in Peabody.  Jarred was interested in ways to “better physically manage our iPads.”  Jarred explained that his school has one cart of iPads for almost 1500 students.  There are no elevators in this school, so custodians *carry* the cart up and down the stairs to teachers’ rooms, depending upon when they have signed up for the cart..!  As the participant next to me replied, “Just when you think you have it rough…!”

There was a last round of sessions, and the standard “smackdown” session where attendees share what they learned from their day of presentations. Unfortunately, I had other commitments, so that was the end of my EdCamp experience.  Even with the few sessions I took part in, the knowledge I gained and the new contacts I made will be resources I will go back to in the weeks and months to come.

I hope you’ll consider an EdCamp in the near future – in fact my next one is only a few weeks away – EdCampCapeCod will be held on August 12 in Sandwich, MA and I’ve already registered!

Give it a try – I think you will be amazed!

If you are a teacher who tutors, register with us for just $12 for a year. This is the only fee! Teachers keep 100% of the money.
Parents, “teachers are great tutors!” Find one in your area today!